In September, Aegean Airlines has delivered an exceptional performance concerning schedule reliability so far. We provide in-depth analysis and discuss if Aegean Airlines can become Europe's most reliable airline in September (and beyond).

When looking at Aegean’s schedule reliability in September, there’s one figure that has remained stable since 1st September: 100%. So far, up to the time of writing, Aegean Airlines has not canceled a single flight in September. Therefore, Greek’s biggest airline is one of the rare European airlines that achieved that result.

Before we dive into the details, let’s quickly provide information on the term “schedule reliability.” Flight schedule reliability counts the number of actually performed flights about scheduled (planned) flights. In other words, the percentage of flights that an airline didn’t cancel. Obviously, airlines aim to achieve 100% schedule reliability. However, airlines have to cancel flights due to several aspects, such as weather, crew sickness, technical, and many others. Therefore, based on global data, we consider schedule reliability above 98% as good, from 95%-98% as ok, and below 95% as weak.

As a result, Aegean Airlines canceled ten flights on average from January to July 2021 each month.

Aegean Airlines is on its way to a 100% Reliability Month

As the article of this post already announces, September looks even better than August. Although Aegean’s flight volume will be lower (~3,800 flights), Aegean Airlines is heading towards a 100% flight schedule reliability in September. Therefore, if Aegean can keep up the pace, the airline might win the prize of Europe’s most reliable airline in September. Moreover, achieving a flight schedule reliability of 100% is definitely extraordinary.

Aer Lingus & Pobeda are Still in the Race too

Nevertheless, Aegean hasn’t won the title yet. Aer Lingus and Russias’s Pobeda are still in the race when looking at the major European airlines. Both carriers haven’t canceled a single flight in September either. However, Aer Lingus, on the one side, operated a smaller flight volume, whereas Pobeda even operated twice as many flights as Aegean Airlines. Therefore, it will be interesting to see how the last three days of September play out.

Aegean Airlines’ Punctuality — The Other Side of Medal?

While Aegean delivers extraordinary schedule reliability, it seems that the carrier has some optimization potential in terms of punctuality. So far in September, the airline achieved an on-time performance of 82.1%. However, the result is even below the airline’s annual average of 87.8%.

The shown ranking and contained data are based on the latest FlightFacts data. FlightFacts is a free-to-use mobile app that lets you discover the operational performance of airlines in real-time. For more information about FlightFacts, click here or visit our download page. FlightsFacts is available for Android and Apple mobiles. 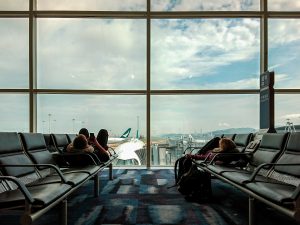